Opposition parties lashed out at the PTI administration on Monday, condemning it for the vicious conflicts in Lahore a day earlier in which at least three workers of the proscribed Tehreek-e-Labbaik Pakistan (TLP) were killed while numerous others, including law enforcers, were injured.

“The real fight is about fighting against the root of the festering problem, not in just responding to the symptoms. Why has the selected government not bothered to implement the National Action Plan, or even discuss arising challenges in parliament?” PPP Chairperson Bilawal Bhutto-Zardari questioned.

PPP Chairperson Bilawal Bhutto-Zardari said that “shedding of human blood and incitement to violence was never the answer to any situation”, recalling that history had taught that “violence begets violence”.

He condemned the violence and expressed grief over the deaths of the TLP workers yesterday as well as policemen during clashes earlier in the week, which he said occurred because of the government’s “inability to handle the situation peacefully”.

“This dictatorial tool continues to be used even today as an operational lever to reduce the salience and size of mainstream political parties, as more and more ‘Frankensteins’ are being midwifed to curb the democratic aspirations of the people of Pakistan,” the PPP chairperson added.

Bilawal said the “tendency to foster and coddle pressure groups through instigating ethnic, religious and sectarian hatred to squeeze mainstream national political parties” had begun during the time of General Ziaul Haq.

Bilawal said the state was responsible for protecting the lives of its people and the government’s failure to do so had resulted in dragging the country into “unprecedented chaos and anarchy, exposing both the population and state to risks that are incalculable”.

He stressed that all issues should be resolved through constitutional mechanisms instead of further violence.

In an apparent reference to the PTI’s long sit-in in Islamabad, the PPP chairperson said the “same modus operandi was being used to further destroy the system”.

“PDM believes that Namoos-e-Risalat (sanctity of prophethood) is the foundation of a Muslim’s ideology. No Muslim can compromise on it,” he said in a statement.

He said the recent events were “concerning and saddening” for every Pakistani, adding that the government’s “failure” to establish peace in the country had been proven.

The loss of citizens’ and law enforcement officials’ lives was due to the government’s failure, he said.

“PDM stresses that peace and stability will only be established in Pakistan when it is run according to the Constitution and people’s wishes,” he said.

Talking about the TLP’s 2017 Faizabad sit-in, Abbasi said that the same series of events had also taken place back then, which is why the Supreme Court gave a judgement on the matter.

A day earlier, Mufti Muneebur Rehman, former chairman of the Ruet-i-Hilal Committee, announced a nationwide strike against the government’s handling of the situation in Lahore and asked that businesses remain closed on Monday. He also appealed to all political parties to support the strike call.

Addressing a press conference, Muneeb demanded that the ban imposed on the TLP earlier this week be lifted and the arrested workers of the party be released.

“Until now, we have remained calm so that the government may come to its senses, but that does not seem to be happening,” he said, demanding that all arrested activists be granted bail on personal surety and all FIRs against them be cancelled. 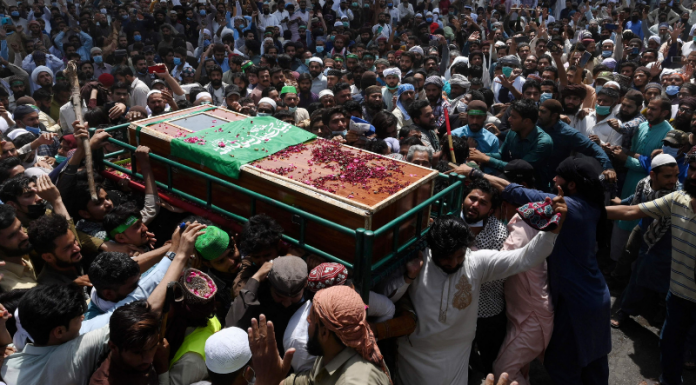